Kesri Singh – The Tiger of Rajasthan

The Maharajah’s guests at these camps were many and varied. They included members of the British and other European royal families, viceroys, diplomats and celebrities from all over the world. Conspicuous among them were the great sporting princes of India including that paladin among hunters, the boldest and most experienced exponent of the art of shikar I have ever met, Sir Umaid

Singh, the late Maharajah of Jodhpur.

of all those who came to Sawai Madhopur was, I believe, Count Seccini, an Austrian who could shoot driven partridges with a rifle. On one occasion I was particularly glad of his reliability as a marksman. During a drive a tiger refused to move ahead of the beaters but turned and hid in a clump of bushes. When the beaters came close to his retreat he showed himself for a moment, moving into still denser cover and snarling to make it plain that he had no intention of going forward. I was a little way off on the left flank of the drive, and hearing the disturbance and realizing that the animal was, in all probability, one that had previously been fired at, collected a few hardy individuals who were near and came over.

As he heard us approaching the tiger gave another warning cough; so I ordered one or two shikaris to fire off some blanks, while I held myself ready to take him if he came back. The beaters had, of course, halted. At the sound of the blanks the tiger emerged from the other side of the thicket with a violent roar, but instead of going straight ahead, raced across our line of advance at extraordinary speed. He was a very tricky target indeed, and had he been wounded would almost certainly have fallen on the nearest beaters. But Seccini caught him as he flashed across the open and dropped him dead with a bullet in the shoulder much to my relief. 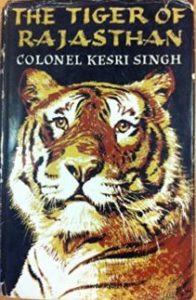